From the far reaches of the Milky Way Galaxy, It's Retro Nerd Girl with a film review for you.

Today I'll be reviewing the movie Flashdance released in 1983.


The Synopsis is:
Alex is a welder who is a flash dancer at night because she wants to attend a dance school to learn how to be a good professional dancer.  She is driven and this film takes us on the journey of her internal evolution. 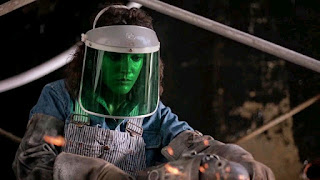 Story:
The story follows the typical hero's journey… getting the call to action and the hero rejecting it, then accepting it.   It seems strange but it’s there.

One of the story’s assets is the fact that this fictional story feels real and that is due to it being based on the life of construction worker/welder-turned-dancer Maureen Marder.

In 1982, Maureen Marder signed an agreement with Paramount releasing her from any claim regarding her life story.  In return she received a check for $2,300. The movie later grossed over $150 million. 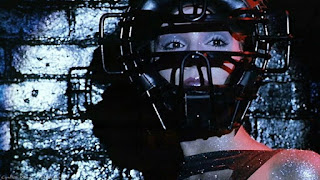 The film seems almost like a melding of an after school special and a a documentary.  I have heard people say that they think that the movie is corny, but that is because the eighties were corny. No doubt about it.  People were trying to uphold old values, but there was a really gritty world out there that was brewing in which we would see emerge later in the 90’s.


Pacing:
At and 1 hour and 34 minutes the pacing is good in my opinion.

The original cut of the film was 2 hours 20 minutes long.  Against the protests of screenwriter Joe Eszterhas and director Adrian Lyne, studio heads Michael Eisner and Jeffrey Katzenberg insisted that the film be cut down.

I can’t imagine how much more of the film there was.


Challenge:
The challenge here isn’t an evil villain rubbing their hands in the shadows, but it is Alex’s life. 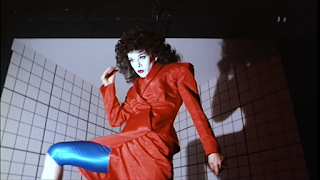 
Empathy:
Initially, Alex really doesn’t say much, most of her involvement with her world is done visually.  She doesn’t actually speak until 9 minutes into the film.

The way Alex talks about dancing it really pulls you into her dreams.  You see her struggles internally and externally with her desires to be a dancer.  Instinctively the audience roots for her and has compassion for her struggles.

At 18 years old she has integrity.  She won't have dinner with the boss even though she is clearly attracted to Nick Hurley. 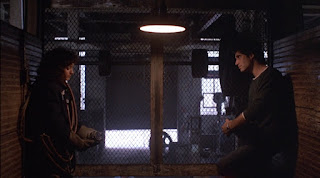 She doesn’t want to get ahead by getting there unnaturally.  But her character really gets an arch, by trying and doing everything she can to take advantage of her moment to shine no matter how it occurs.

Even though it makes me tear up, I love the small stories that visibly show people pursuing their dreams and the amount of people who are willing to talk them out of them before they start.

Following the story of her friend Jeanne is heartbreaking, but that is the real story for most people seeking their dreams that sometimes a little encouragement could change it all.

The film shows us that when Jeanne gives up, how it impacts her self esteem even when there are people there to support her. 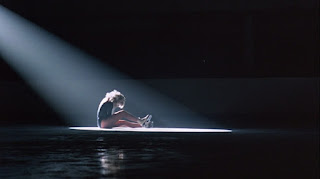 This is a lesson that Alex learns and it helps her to reach her character arch.


Technical:
The film was the first collaboration between producers Don Simpson and Jerry Bruckheimer, who went on to produce movies to earning $3 billion worldwide.

The film was gorgeously shot and composed, filled with amazing original contemporary songs for the movie that influenced pop culture the music of its time and defined the 80’s. The soundtrack was amazing and made the film so addicting at the time.   They're all wonderful songs  I remember being glued to the TV when the music videos played.

My favorite song is actually the love theme.

Irene Cara wrote the lyrics to the film's Oscar-winning theme song while riding in a car to the recording studio the day she recorded the song. 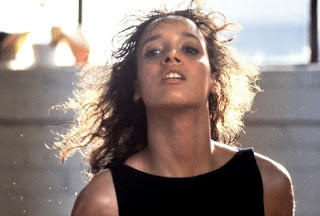 Another cool fact about the music is that Michael Sembello had intended that the rhythm of the song "Maniac" be too fast to dance to.  And happens to be one of the best songs to dance to.

It began a trend in film making blocking off montages like mini music videos.

One incredible feature to the film is it’s focus on the mesmerizing art of dance of all kinds.  What was shocking about the film at the time was its inclusion of  break-dancing into a the film.  Since it was a building dance movement at the time, it’s recognition set audiences on fire.


Performances:
Jennifer Beals is perfect for the role of Alex because she expresses so much with her eyes and smile.

The dancing is top notch for the time, but there are obvious scenes you can tell it was not Jennifer Beals dancing.  The wig and body types didn’t match perfectly, but it was done as gracefully as it could. 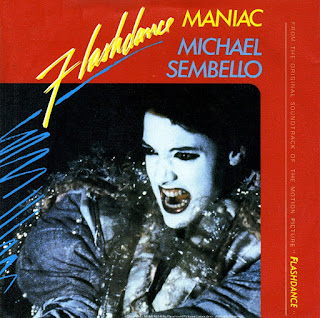 Now it is well known that French actress Marine Jahan was Jennifer Beals' body double for most of the dancing scenes.  But at the time of the release of the film, no one knew and Jahan was kept from the press as not to ruin the illusion.

What worked for the performance was really that the two actresses had similar shaped torsos and face.  The scene where Jahan is performing the kabuki face dance, you can’t really tell that it is not Jennifer doing it, if it weren’t for the wig.

The last dance audition, was a group effort of body doubles to achieve that memorable scene.  Marine Jahan did the main dance sequence.  Alex's leap through the air was done by gymnast Sharon Shapiro and the break-dancing was done by Crazy Legs.

Jennifer Beals' added her personal touch to a fashion trend the movie started, of the collarless sweatshirt.  It seems this was one of her own shirts that shrunk in the wash and she had to cut the collar off in order to get it over her head. 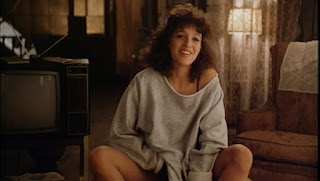 Michael Nouri plays Alex’s boss and love interest, Nick Hurley.  He plays Nick wonderfully, a man fascinated by a young woman, but also trying to love her.  I think that his chemistry with Jennifer Beals is delightful.

Dina Tech performed by Tina Rhodes, one of my favorite actors from the 80’s, doing the dance for “Manhunt”.  Wow!  She kills it! It shows her athleticism and her incredible physique.

However, on a sad note, Sunny Johnson, who played Jeanie, died at the age 30 in 1984, a year after the release of the movie, from a cerebral hemorrhage.  There was a very honest innocence in her performance that touches the heart. 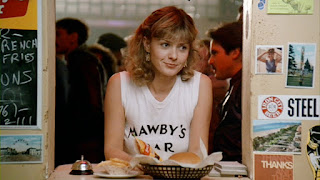 Best:
Pete, who introduces Nick Hurley to Alex, memorizes her social security number to let Nick know that she works for him.  I don’t know, but that scene always tickles me into laughter.  It’s so weird.

The music and soundtrack were incredible.  And the dancing sequences were superb, especially the amazing dance audition at the end.


Wish List:
There is a couple of racial jokes I wish wasn’t in the movie that really cheapens the enjoyment of the film and I really think that it was something that was popular in that time, but honestly, it’s not even important to the script, it could have been cut out.


The ending:
The ending is my favorite part of the story.  We have the iconic dance audition with Irene Cara’s song “What a Feeling”, in which the board of the repertory get to see Alex’s true talents. 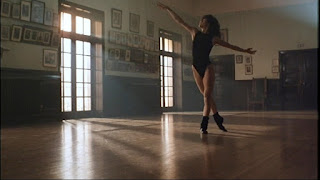 I cheer for her and it just makes me very happy to see her express herself in dance in her very honest way.

Enjoyment:
Pop singers, fashion designers, have been influenced by this movie and it’s iconic images and sound.  The legacy of one shoulder sweatshirts and leg warmers lives on.

In July 2008, a stage musical adaptation Flashdance The Musical premiered at the Theatre Royal in Plymouth, England.

I love this film and I know that my nostalgia goggles are on.  A film like this today wouldn’t be able to make it on the big screen, but it worked in the 80’s.   Does it still hold up?   For me, a lot.  But for a younger generation, I’m sure there will be moments that will test their patience. 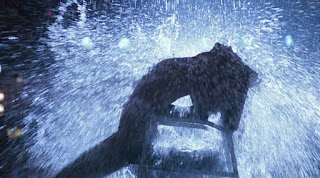 As a person with a background in dance, this movie is like taking a dip into heaven for me.  It’s sexy and beautifully lit, ever scene nearly cinematically gorgeous.

But beyond the gorgeous visuals,  the incredible contribution to music, and the fashion trends the film inspired, this movie has a  deep message.

Truer words couldn’t have been spoken by Nick Hurley when he tells Alex, “Don’t you see.  You give up your dream... you die.” 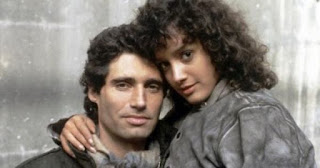 So dream on, Movie Lovers!  Dream on!


That sums up my review.  I hope you liked it.  This is Retro Nerd Girl signing off!  Take care movie lovers!  I'm off to the next review!