From the far reaches of the Milky Way Galaxy, It's Retro Nerd Girl with a film review for you.
Today I'll be reviewing the movie 300 released in 2006 and sometimes listed as released in 2007. 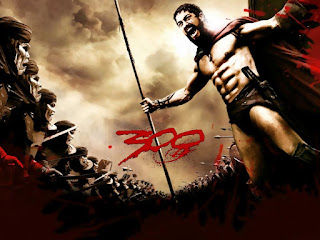 Performances:
The Spartans and some of the other characters were all bare-chested and had to undergo a rigorous 8-week training by Marc Twight, a professional mountain climber in which actors never repeated the same exercise twice to stress the muscle.  In order to bond with his actors, Zack Snyder also underwent the same training.
Gerard Butler who played King Leonidas was perfect casting and he had so much dedication to the project.  He spent 4 hours a day for over 4 months, to get in shape for the role and suffered many injuries that developed a painkiller addiction for a while.  I think it’s easy to say that he’s hamming it up, but there is so much nuance to his performance, acting with his heart and soul as a man who knows he’s going to die.  He puts his heart and soul into each speech and he was the heart of the film’s success.
Lena Headey was fantastic as Queen Gorgo, giving us a strong female protagonist. Her entire subplot was created for the film and not part of the comic.  I thought it was a wonderful addition that I fully enjoyed and I am so glad that they did not waste Lena’s talent in this film.
Rodrigo Santoro came to the project for the role of Astinos,  Zack Snyder saw something in his audition that he felt would be perfect for the part of Xerxes.  Although there really wasn’t much screen time and story depth for the character, Rodrigo played him with depth, showing off attributes like arrogance, narcissism, pride and cruelty.  It impressed me how much he did to portray the character with his physicality.  He said that he used Yul Brynner’s performance in The King and I (1956) as his inspiration and you can see it on screen.
This film was Michael Fassbender's feature film debut and it is so it’s a little strange seeing him in a film where he’s not a main character or main supporting character.  Every Time he’s on screen he kills it, just giving his performance so much energy and at times inserting some levity to the film.
Everyone did a fantastic job bringing the world of 300 to epic life.
Enjoyment:
A small portion of the film was shown at the July 2006 Comic-Con Convention in San Diego in order to generate buzz for the film and it worked brilliantly. The attendees requested to view it three times and then the trailer was leaked on the Internet.
When looking up this movie, there is a discrepancy whether or not the movie was released in 2006 or 2007.  That was because an unfinished cut of 300 was shown at Butt-Numb-A-Thon film festival on December 9, 2006.  It was not the official release, but it is often considered the release date.
The actual official release date was March 9, 2007.
At the time it was released, it was the highest-grossing R-rated comic book film ever made, until the release of Deadpool (2016) and it had the 24th biggest box office opening in history.
It was a huge success at the time with everyone repeatedly shouting King Leonidas’ quote, “This is Sparta!”  It was great. There were so many parody YouTube videos and movies that were hilariously poking a little fun at the flick and it became a phenomenon.  It is said that even directors like James Cameron were big fans of the film and its groundbreaking use of visuals and storytelling.
In 2014 300: Rise of an Empire was released with many of the returning surviving characters directed by Noam Murro.
In 2018, Frank Miller released Dark Horse, published Xerxes: The Fall of the House of Darius and the Rise of Alexander.
This film is not my type of film.  I am not exactly a fan of war time movies.  When this film was released, I avoided it like the plague.  I wasn’t having any of it.  I think it was about 2012 when I first saw it and I was blown away that it was nothing I expected, but instead, by the way the film was shot, I felt as if I was part of the Spartan army and Leoniadas was speaking directly to me, getting me ready for battle.
It also had so much fun with the story aspect.  It wasn’t just about the visual action and the bombastic speeches or the repeatable quotes.  The story of sacrifice and love is so powerful that I was completely teary eyed by the end.  Stilios says, “I am honored to die by your side” and Leonidas says, “I am honored to have lived by yours.” That’s when the tears flow!
At that moment Leonidas appreciated life.  It reminds me of the last moments of Roy Batty in Blade Runner 1982 and it’s beautiful.  I just think this film is brilliant, from a storytelling standpoint… It made me feel.
My Rating:
9.7
That sums up my review.  I hope you liked it.
This is Retro Nerd Girl signing off!
Take care, movie lovers!  I'm off to the next review!

Queen of the Damned 2002 Movie Review with Spoilers

From the far reaches of the Milky Way Galaxy, It's Retro Nerd Girl with a film review for you.
Today I'll be reviewing the movie Queen of the Damned released in 2002. 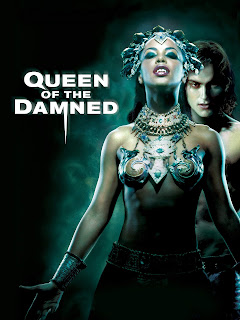 Starring:
Stuart Townsend, Marguerite Moreau, and Aaliyah
Directed by:
Michael Rymer
Genre:
Horror, Fantasy, Drama
Motion Picture Association of America (MPAA) Rating:
R
Budget:
$35,000,000 (estimated)
Current IMDb Rating When Reviewed:
5.3
The Synopsis is:
The vampire Lestat becomes a rock star whose music awakens the queen of all vampires who wants to reign the earth again with him by her side.
Story:
American author of gothic fiction, erotic literature, and Christian literature, Howard Allen Frances O'Brien otherwise known as Anne Rice wrote the book, Interview with the Vampire published May 1976.  The book was heavily influenced by Anne’s real life trauma of losing her young daughter Michele, nicknamed "Mouse" who died of acute granulocytic leukemia in 1972 shortly before she would have turned six.
She connected Michele’s blood affliction with vampirism which birthed a series of books, The Vampire Chronicles.  It centered around the fictional character Lestat de Lioncourt, a French nobleman turned into a vampire in the 18th century.
The first book was poorly received.  That is something I never understood because it’s an excellent book, but it was a decade ahead of its time.
Sure enough, nine years later she followed up the novel with The Vampire Lestat in 1985 which was a success and debuted at No. 9 on The New York Times Best Seller list and spent a total of six weeks on the list. The Vampire Lestat ended with a cliffhanger and demanded another book in the series.
In 1988 The Queen of the Damned was published and reached the #1 spot on The New York Times Best Seller list, staying on the list for more than four months.  It was also a main selection of the Literary Guild of America for that year.
I remember working at a bookstore in the early 1990’s and Anne Rice’s books were a top seller for years and years.  Many of the readers of the Queen of the Damned knew they had to read the first two books in order to understand the scope of the story, which each book wonderfully delivered.  I was among those readers.
Anne built a whole new world of vampire lore to excite a growing vampire loving community of the late 80’s and 90’s.
With such a following, it was soon that Hollywood came knocking on Anne’s door in the form of Warner Brothers, to adapt her books.
The first to be adapted was Interview with the Vampire (1994) starring Tom Cruise as Lestat.  At first, Anne and the fans of the series weren’t happy that Tom was casted, but with careful attention to makeup and Tom’s dedication to the role, he defined the role in a new way while honoring the written character.  It was a success being the tenth-highest-grossing movie of 1994, earning two Oscar nominations so naturally a sequel was in the works… or was it?
Anne Rice wanted to be involved in any way possible to help bridge the gap between what her fans expect and what she wrote.  This would have also excited the fans of her novels.  She even offered to write a script for free, however, Warner Brothers ignored her and the property for years.
In a mad dash to use the property before the rights went back to Anne in the year 2000, in 1999 Scott Abbott and Michael Petroni were hired to write a screenplay. Australian filmmaker Michael Rymer was hired to direct.
Instead of tackling the direct sequel Scott Abbott had the idea to combine The Vampire Lestat and The Queen of the Damned, taking the connective tissue between the two books and discarding most of the rest.  Seeing how problematic that would be, Rymer suggested that the project should be a miniseries, but it was shot down immediately.
As well, none of the actors returned from Interview with a Vampire and the overall look of the movie was drastically different.
With that as it was, the story is not perfect.  The script in particular had some cringey moments that didn’t work.  But on the other hand, it does have a few good unforgettable moments where it leaned more heavily on the source material and riffed off of that. That’s when the film is the most fun, when it is playing with those themes.
Pacing:
At one hour and 41 minutes it feels a bit too long in some parts and in other parts, one desires more time with the characters.  Time management was a big issue for me when trying to figure out what didn’t quite work.  There was a lot of time given to dead or dull concepts, but there were wonderful splashes of  content that entertained me. 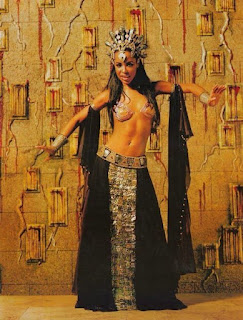 From the far reaches of the Milky Way Galaxy, It's Retro Nerd Girl with a film review for you.
Today I'll be reviewing the movie Don’t Look Up released in 2001. 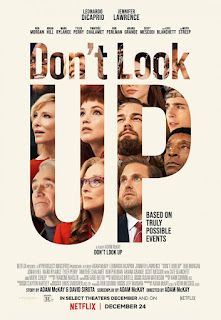