From the far reaches of the Milky Way Galaxy, It's Retro Nerd Girl with a quick spoiler free film review for you. 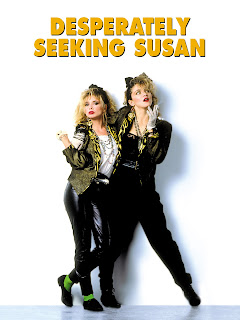 
The Synopsis is:
A lonely housewife, Roberta lives vicariously through the personals.  One of the couples in the personals are a rock band member and his wayward girlfriend Susan.  Mistaken for Susan Roberta stumbles upon a botched heist for a priceless pair of Nefertiti’s earrings. 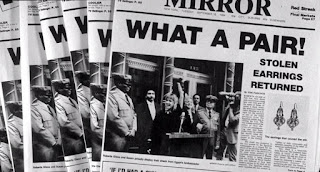 Imagine, Diane Keaton as Roberta and Goldie Hawn as Susan.   That was the original concept cast in mind for the film.  I am sure it would have been good, but the tone would have been completely different.

Orion Pictures wanted to keep the budget under $5 million and director Susan Seidelman wanted newcomers.  Rosanna Arquette and Madonna became the choice to play opposite each other to appeal to a very young hip audience in 1985 and it worked.  Not only that, the inclusion of the ultra infectious song “Into The Groove” and promotion of the music video on MTV sent teens and teen wannabe’s running to the theaters to see Madonna, who was one of the hottest recording artist of the year.

The beauty of it all was that the film didn’t disappoint, as its leading ladies were wonderfully portrayed and helped to hold up the story.

Madonna’s acting is pretty good.  She does the role pretty naturally as her on stage persona and it works. 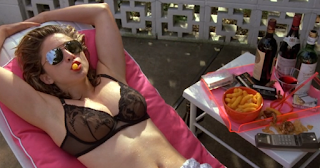 Susan is the classic hot mess hobo cheese doddle eating rebel complete with unshaven underarms that you actually like even though she is morally inept.  She’s a petty thief and con artist, and is pretty much a walking disaster wherever she goes.

The only one who seems to be able to tame her is her boyfriend Jim and her love for him is so very endearing.  Her character arch seems to begin when she tries to fix her mistakes.

I like the fact that Susan is the one to actually get to the bottom of Roberta’s emotional core by doing a little investigating work.  It’s so interesting how you spend most of the movie wanting Roberta and Susan to finally meet up. 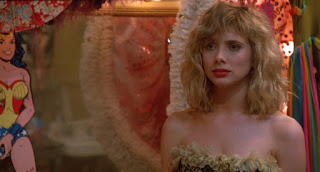 Rosanna Arquette was particularly good, as the film really focuses around her character, Roberta and her psychological crisis of being an extremely lonely housewife feeling out of sorts, belittled in her loveless relationship and placement in the world.

She is desperate for love.

There is a bit of infidelity that Roberta engages in that I am not so crazy about but the film makes it known that her husband Gary, a hot tub business owner, is actually cheating on her.

However, it almost seems like an afterthought in order to justify Roberta’s love affair with a young man by the name of Dez, who mistakes her for Susan.  He takes her in and takes care of her. 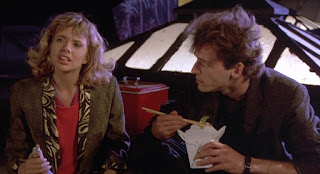 Roberta’s relationship with her husband is what drives her to find entertainment in the personals as a way to see what love is first hand through Susan and Jim.

In many ways this movie proves that the right accessories matter as much of the action revolves them.

One of the iconic jackets from the film was sold at a Hollywood auction in 2014 for $225k and one of the earrings worn in the film fetched $34k.

We have a hilarious performance from Laurie Metcalf as Roberta’s brash sister in law.  She doesn’t hold back.

And I loved the creepy performance of Will Patton as the bad guy.  Wow, I just loved his performance… with all of the micro expressions he emotes.

We also get small cameos by John Turturro as a host of a magic show and Giancarlo Esposito has a bit part playing a disgruntled street vendor.

It’s also great snapshot of New York in 1985, bringing back so many memories for me.  It’s like a wonderful time capsule.

For a more modern audience, this is tough to recommend the film for the pacing issues within the film.  It’s a fun movie, but it lacks liability and tension along with a cheesy romance novel feel to it. 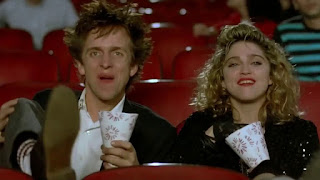 It’s a great film for nostalgic purposes and fans of Madonna.  At the time it was released it was very satisfying for it’s light fun story without a whole lot of forced comedy mainly geared toward the MTV generation.  It was fabulous seeing it again after all of these years.


That sums up my quick spoiler free review.  This is Retro Nerd Girl signing off!