From the far reaches of the Milky Way Galaxy, It's Retro Nerd Girl with a film review for you.

Today I'll be reviewing the movie Equilibrium released in 2002. 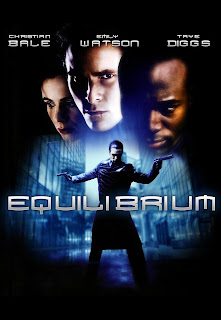 The Synopsis is:
Libria is a world where emotions are outlawed and grammaton clerics are ordered to kill any one indulging in emotions (sense offenders).


Enjoyment:
I did not know this movie existed until seeing a flyer for it on Amazon Prime and then a friend at work told me it was one of his favorite films.

The first time I saw this movie, I wasn't impressed, because I saw too many references to other movies, like 1984, Fahrenheit 451, THX 1138, Logan's Run, Gattaca, Brazil, and Blade Runner.  I was also a little disturbed by the fact that there were so many emotionless characterizations in this world.  It turned me off.

My friend at work insisted I see it again and raved about it so much that I decided to give it another view and I am so glad that I did because I the second time around, I became a fan as I saw some brand new subtleties to the film I didn't notice before.

Pacing:
At an hour and 47 minute.  The pacing is pretty good.  There are some stagnant scenes, I could do without.


Story:
The film takes place in 2072 in a utopia called Libria.  Books, art, personal treasures, music are all illegal because they inspire human emotions.  The rulers of this world believe that human emotions cause war... even the good ones.

With the help of the drug prozium 2, that suppresses emotions, humans are nothing more than drones existing to keep the city going.

Equilibrium, the title of the film comes from the name of the building where people get their supply of the drug prozium 2.

The laws are upheld by the grammaton clerics that are trained killers.  The opening action sequence is brutal as the best cleric, John Preston kills off a band of of what they call sense offenders that collect art and risk their lives to be feeling human beings.

Preston is trained in a technique called the gun kata that helps him to achieve maximum kill zones.  These clerics don't see killing as murder.  To Preston, he is simply doing his job to ensure peace, which is ironic.  Guns and peace don't go together.  Guns and oppression do.  But this society doesn't see it that way.

Their desire is to prevent war.   And yet more people are being killed by them "maintaining" peace.

Preston's partner, Partridge shows signs of being emotional rather slightly, but Preston is so good at his job, that he can pick up on it.   Before facing off with his partner Partridge recites yeats to him and it sticks in Preston's head throughout the film.

He skips one treatment of Prozium and that begins his journey toward being a sense offender himself.

The story has great ideas and drips with symbolism everywhere.  Preston meets Partridges sense offending lover, Mary O'Brien. Her last name is a possible reference to the O'Brien from George Orwell's novel 1984.

That was pretty clever, but then what hurts the film is the things that make no sense. Preston kills a lot of people to save a dog.  And although I love that he's feeling some emotion for the dog, he's killing human beings who if given a chance could be feeling.

And how are spouses and kids possible in this society?  Why not just have children incubated?  That seems more logical.  The family unit would definitely inspire some emotion through attachment.  That's just a few things that I found wrong in the story.

However in my opinion it doesn't tank the film, because there are a lot more things to like about it.  The idea of this kind of utopia seems silly to us now, but this is not a new concept.

I think the true way to get people to become drones, would be to over expose them to negative emotions, desensitize them into apathy without having to use drugs.  Which is not too far from our world today.

In Fahrenheit 451 they were closer to realism with the fact that the drugs made people so happy they ignored the negativity in their world to the point they could be controlled.  Human beings need emotions.

This film is almost always compared to the Matrix, but I don't see it.  They seem like totally different movies to me.  However, there is a point in the Matrix there Agent Smith talks about another Matrix that failed when they designed a world that was a utopia for human beings.

What if this is the prequel to the Matrix... the utopia world?  Whoa.  But on a serious note, to me this movie is like a straight up reboot of Fahrenheit 451 for sure.  And a reboot done right.  You change the name and then insert your own ideas.  There are almost exact scenes that mimic Fahrenheit 451.  But what is added is an incredible action element and the saving grace to this movie.


Challenge:
The challenge is pretty much Preston concealing his personal revolution from the grammatons.  I feel that was well acted and well done.

The guy presented as the obvious bad guy Dupont is your standard villain hypocritical, emotional and out for ultimate control.   I thought he was perfect.

Brent was also pretty good as a junior villain. 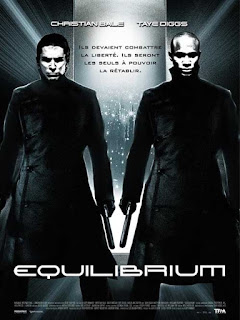 Empathy:
At first, I didn't like Preston.  He has no emotion but after looking at the film again, there is a deeper level to what is on the screen.  At first, I thought he was boring.  But on the second viewing, I could visibly see that he emotions peeking through, but Preston is withholding his emotion to keep from being detected.

You can really see him struggle with this.  When he is given the challenge to face Father, he takes it but admits he doesn't know that he can do it.  He’s very human.


Technical:
There is such a great attention to detail from the sets, the costumes, and the special effects.  The cars driven by the Grammaton Clerics are Cadillac Sevilles with exteriors and interiors painted totally white.

The inspiration for the city scapes and the design of Libria came from the works of Hugh Ferriss, an early 20th century conceptual artist.  The action scenes are extremely well done.


Performances:
Wow, the performances were amazing.  Again, I didn't see it the first time I saw it, but I really could see the complexity of each of the characters.

Christian Bale really conveys the troubled soul nearly biting his lip to show emotions... forcing himself to play cool.  Not only that, you want him to get away with it.   You really want him to kick some serious butt and take down this whole stupid regime.  LOL!


Best:
The fight scenes are nothing short of awesome.

Preston is an incredible force to deal with as we follow his journey.  He is the best grammaton cleric and he proves that.  Some of the stunts are unbelievable, but they are perfect for this movie, because at least it commits to its idea.

This film is presenting the world of Libria is a fantasy world that can't exist, therefore common rules don't apply.  It's a rather big use of symbolism.  It doesn't back down for realism.

The gun-fu, gun-kata is pretty cool.  It reminded me of something you'd see drawn in a comic book. I enjoyed the detail of explaining it and watching the training.   Highly improbable, but fun.  I also enjoyed the 1984 hyper-stylized propaganda.  I know for many people, this didn't work for them, or they just didn't understand it, but I loved it.

Again the general style of this movie is like straight out of a comic book and I enjoyed that.


The ending:
The ending was quite satisfying, and very exciting.  I won't give away anything but the last 20 minutes are just super action packed and fun.  That's how I like my endings.


Wish List:
There is a lot of violence in this movie and it is my only gripe.  There is one moment in a fight scene that was really too gross and it keeps this movie from reaching a wider audience.  There are 236 deaths shown in this film and 118 of them were committed by our main character Preston.  They even kill dogs for crying out loud.  It's over kill, no pun intended.

I wish there weren't so many plot holes.  It tries so hard to blow your mind that it forgets about what happened earlier in the story.  Like the gun switch happens after the incident, and the bad guy says lines from a scene he should know nothing about.

What about the emotions clearly visible in Brent, Dupont, and many of the people who are not supposed to have emotions.   I just wish the story and script was cleaned up a little to improve the continuity.


Summary:
If you had a rough day and you just want to see some people get their butts kicked, oooh, this is the movie for you.  It's got swords, it's got gun-fu, it's got poetry, and it's got incredible style.

This movie is bold it goes through great lengths to commit to this fantasy, giving us a warning about a possible dystopian future.  The lesson is that our humanity is worth living for... good or bad, our emotions are what truly makes us alive and it's the last thing we should ever want to give up.


That sums up my review.  I hope you liked it.

This is Retro Nerd Girl signing off!